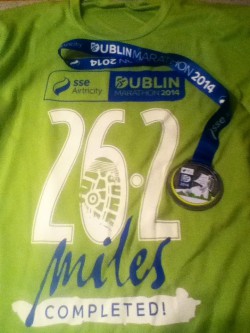 Just about completed, mind you.

A tough day, with no PB at the end of it, but I’m still happy. I finished the 2014 Dublin Marathon in 3:38:59, just beating the mythical 3:39 barrier all us marathon runners talk about.

(You can find all the Dublin Marathon 2014 results online, and in cold print in tomorrow’s Irish Independent.)

My finishing time was a good half-hour slower than what I had trained for, and what my race results during the summer suggested I could achieve. Still, I’m pleased that I managed to turn a difficult run into a decent time – and after all, it’s the second-fastest of my five Dublin Marathons to date.

I’m not sure what happened to me today. All I can do is present the facts; despite training well for 18 weeks and feeling fine before the race, from the very first mile I felt I was working too hard to maintain a 7:10 mile pace that should have been comfortable for me. I got as far as mile fifteen on schedule, but from there I slid into 8-minute pace until mile 20, and 10-minute miles from there until the finish.

I have no qualms about the conditions, so I can’t blame them. I didn’t find the breeze so bad, nor the temperature so unseasonably warm. (My second-fastest marathon ever was run in 30-degree heat.) And the hills and drags weren’t so fearsome. No, today’s underperformance was all my own work.

But people have had worse marathons. Even though the last ten miles today were probably the worst I’ve ever felt in a race, in hindsight I’m glad that I kept the head together and ploughed on to the finish.

I liked the new Dublin Marathon course. The first mile through the old red-bricked streets of the Liberties was full of character, if not the characters that used to line the old route along the North Circular Road – and the tight corners weren’t as congested as I had feared. (That might have been different for runners elsewhere in the field.)

And I’m sure our overseas visitors were happy to pass two popular Dublin landmarks – Christchurch cathedral and the Guinness factory. The familiar heady smell of hops wafted over us as we passed the Guinness riverfront gate coming up to mile three. I passed the 5-kilometre marker in 22 minutes.

Next came the long drag up to and through the Phoenix Park. The Dublin Marathon has in most years gone up the centre of the Park, but perhaps the major route changes elsewhere made Chesterfield Avenue stand out more than before. What was forecast as a south-westerly breeze, which would have been behind runners, transpired to be a north-westerly into our faces. However, the field was still fairly packed through the Park, allowing runners to draft and take shelter.

Leaving the Phoenix Park, we passed through a great new addition to the Dublin Marathon; Castleknock was rocking, and may well have taken Chapelizod’s crown as the best town of support on the route. In particular, I’ll give a big shout out to the man playing the clarinet; well done, that man.

From Castleknock the route went downhill and back towards the north-western entrance of the Phoenix Park, down the Lower Glen Road for another downhill stretch to the Chapelizod gate. This was a welcome ease for runners; still, I noticed that the field around me had strung out considerably by now. It seemed that some runners were already having a bad day.

Despite its now-customary waft of barbecue, Chapelizod was quieter than last year. But further along the road at mile 11, Kilmainham drew a large crowd. By this point, though, I was definitely working harder than I expected.

Rialto was a quiet, leafy stretch that gave me a chance to re-assess the situation. I would keep going at my 7:10 pace through halfway and from there take things mile by mile. With all my thinking I hardly noticed the halfway point on the Crumlin Road; I went through in 1 hour 33 minutes, pretty much on schedule.

Mile 14 came and went without extra difficulty, but at the 15-mile marker I had slipped behind my schedule for the first time. When I tried to arrest this decline in pace, I got no response from the gears or fuel tank. My legs and my head felt fine, but I found myself short of breath and having to blow out stitches.

At mile 16, turning past the KCR in Kimmage, I was having serious difficulty catching my breath. I was worried that I would start hyperventilating – or worse. I told myself that I didn’t want to end my marathon in a first-aid tent, and I managed to regain some control over my breathing.

However, I had lost loads of strength in my body by now – not in my legs, as I said, but an all-over lack of energy. Time to re-assess again; heading through miles 17 and 18 without any improvement, I just wanted to finish the race and any sort of a decent time would be a bonus.

The last ten miles of my race were just a weary plod. Using the only marathon mantra that works, I resolved to keep lifting my feet so that I would finish. But turning the legs was a real struggle. Heading out of Rathgar at mile 18, the sun came out and stung my eyes – this was where my head started to struggle too. The 3:10 pace group wafted past me; I just had to block them out of my field of vision.

If there was any consolation with my travails, it was that I was finding the flat parts of the route so hard that I hardly noticed the climbs at Milltown and Clonskeagh. Cresting the hill at the top of Roebuck Road at mile 23, the traditional turn for home, I didn’t get the usual surge of pre-finish optimism: downhill wasn’t much better than the flat. A rumble of hooves from behind prefigured the 3:20 cavalry overtaking me.

I plodded on through the last few miles. In Ballsbridge the 3:30 pacers went by me; my below-par performance was confirmed. I would be half an hour down on my target finishing time.

Still, I mustered enough mental clarity to appreciate the new last mile of the Dublin Marathon, along Haddington Road and down Mount Street to the finish. It was a fantastic cauldron of noise, lined deeply with cheering crowds. Also, you can see the finishing arch from half a kilometre away; scraping together whatever physical and mental strength I had, I decided to enjoy the run-in as best as I could.

By now my finishing time didn’t matter. I knew I would still clock 3 hours thirtysomething, which I would have gladly taken five miles back the road.

Thanks to the Dublin Marathon organisers for putting on a great event, and to the thousands of people who came out and cheered. It all added to a great marathon experience, regardless of the result.

I have to be philosophical about these things: I’ve had bad preparations that still yielded good marathon results, and vice versa. Sometimes you just have a tough day.

And at least there will be another day.

This entry was posted in Dublin, Marathon and tagged Dublin marathon, running. Bookmark the permalink.